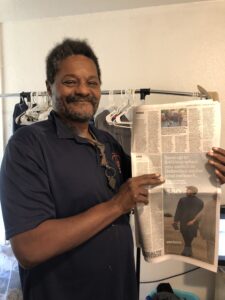 Sarasota man, once homeless, celebrates at restaurant that banned him

Michael Smith, who lived for decades on Sarasota’s streets, recently celebrated his 65th birthday at a Main Street restaurant he was once barred from entering.

By Sarasota standards, it wasn’t a flashy occasion. A quiet Sunday brunch at Mattison’s. A burger and fries. Some cupcakes, candles and a couple of dollar store balloons.

But when the entire waitstaff came out to sing Happy Birthday in honor of Michael Smith‘s 65th year on earth, even the honoree himself was taken aback.

“They all recognized him and he recognized a lot of people too,” said Megan Howell, who, with her colleague Barbara Raskowski, chose the venue for Smith’s surprise celebration. “You could tell he was very touched and very surprised. It was great to be able to take him to a place where he was not welcome before.”

As recently as three years ago, if Smith had shown up at the popular Main Street watering hole looking for a meal, he’d have been told to move on. Back then — and for more than 25 years before that — Smith was perhaps the most familiar face among the chronic homeless population in downtown Sarasota.

On cold days you could find him in the doorway of a shuttered business, wrapped in a foul-smelling blanket; in summer, sprawled across an empty bench, usually without a shirt on. Depending on his mental state, he might share a long ago memory of his Golden Gloves days or spin a bizarre tale of space aliens.

Residents gave him food or money, with which he usually bought alcohol or cigarettes. Law enforcement had mostly given up arresting him on minor charges that never kept him off the street for long.

These days Smith, who has been diagnosed with schizophrenia and/or dementia, wakes up every morning in a small apartment near the Ringling College of Art and Design, takes a shower, feeds his pet fish and does his cleaning chores. He makes his bed every day first thing, though no one has ever asked him to. He watches a lot of television — sports and CSPAN (“He’s better informed than we are,” Howell says). A while ago, he quit smoking, entirely on his own.

Smith’s life is quiet and routine, which is the way he likes it. He looks forward to visits from Howell and Raskowski of Second Heart Advocacy, who oversee the needs of 16 other clients as well, most with mental illness but living independently with regular oversight. A FACT (Florida Assertive Community Treatment) team from Centerstone monitors his medications and his well-being.

Recently Smith told Howell and Raskowski, “I guess I’m the luckiest guy around. I’ve got all these ladies coming to check on me.” But after years of living in the open, he also treasures his privacy and protection from the elements.

When Smith agreed to enter the 12th Judicial District’s Comprehensive Treatment Court in 2017, a program that diverts chronic homeless offenders from jail and into housing and support, no one knew if the commitment would stick. Because he had no family, the late Steve Seidensticker stepped up to become his guardian so he could remain in the program. Once Smith was housed, the restaurateur went by frequently to check on his charge, always slipping him a few bucks on the way out.

Less than a month before his death in August of 2018, Seidensticker visited Smith for what he knew would be the last time. He didn’t say goodbye, but Smith, whom Howell calls “intuitive,” knew something was up. When the founder of the Tableseide Restaurant group died several weeks later, Smith’s caretakers were “terrified” to give him the news, fearing it might dismantle his progress.

But if his years on the street taught him nothing else, it was to be a realist. Smith still asks about Seidensticker now and then, but having someone disappear from his life isn’t really anything new.

Not Howell and Raskowski though. The women CTC judge Erika Quartermaine has called “special ops for the mentally ill,” are the steadiest presence Smith has ever known in his adult life.

“We’re on call all the time and they know we’re there for them,” Howell says of her clients. “We live with understanding and we both have patience that is unrivaled. We meet people where they are and just figure out how to get them through the next day, the next hour, the next minute. A lot of times, the solution lies right in the problem.”

Smith lives within walking distance of his old stomping grounds and the women have always feared that the allure of his old lifestyle might draw him back one day. So the birthday celebration wasn’t just about being a year older; it was about another year under a roof.

Raskowski, who frequently takes a back seat to the more voluble Howell, says what has kept Smith housed and safe is nothing more — or less — than love.

“Our relationship with them is love and trust and that’s what a lot of them have been missing throughout their lives,” she said of her clients like Smith. “They have to feel they’re worthy of love — from themselves and from the rest of the world.”