What happened to a chronically homeless Sarasota man? 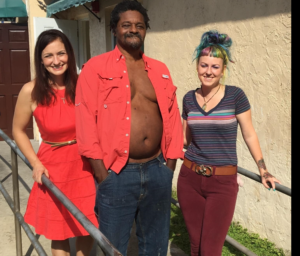 If you’ve walked down lower Main Street in the past decade, you probably knew Michael Smith, even if you didn’t know him by name.

Michael was face of what we have come to call Sarasota’s “homeless problem.” During his 20 or more years of living on the street, he’d racked up more than 100 arrests, almost all of them related to his homelessness — trespassing, petty theft, lodging. Inevitably he would be released, returning to the sidewalks of the town where he grew up as a Golden Gloves boxer.

On cold days you could find him in the doorway of a closed business, wrapped in a foul-smelling blanket; in summer, he might be sprawled across an empty bench without a shirt on. He didn’t ask for money or food, but people gave him both. Delusional, cognitively challenged and — other than offending the sensibilities or noses of some passersby — harmless, law enforcement eventually stopped arresting him, knowing it would only perpetuate a cycle they couldn’t halt.

Michael’s presence was so predictable that when, about eight months ago, he disappeared, people started speculating about what had happened to him.

I heard the city put him on a bus, someone told me. He must be in jail, someone else said. A downtown condo resident, who used to buy an extra portion of whatever take-out she was getting for dinner to hand to Michael on her way home said, “I’m worried. He didn’t look healthy.”

In fact, for the first time in longer than anyone can determine, Michael has a roof over his head. He is living in an apartment, enjoying daily showers and clean laundry and sleeping on a single bed made up with “Star Wars” sheets. He is one of the earliest successes of the new Comprehensive Treatment Court, which is designed to divert chronic misdemeanor offenders with mental illness to housing and support.

The program, catalyzed by Mental Health Court judge Erika Quartermaine, is still in its embryonic stages and many kinks remain to be worked out. In Michael’s case, there would still be no happy ending had it not been for a few people who refused to pass the buck.

Michael came to Quartermaine’s courtroom on a misdemeanor charge on March 8 and was offered the option of entering the CTC, which is a voluntary program. At the time, she didn’t recognize him as the man she’d seen many times lying on the sidewalk near the Louie’s Modern restaurant.

She ordered a competency evaluation; a psychologist found Michael to be “suffering from schizophrenia or dementia,” “guarded and paranoid,” and exhibiting cognitive dysfunction. The incompetency finding meant that, in order for Michael to remain in the program, he would need a guardian.

Attempts to find a relative proved futile. So Quartermaine turned to restaurateur Steve Seidensticker (of the Tableseide Restaurant Group, which owns Libby’s and Louie’s Modern), whom she’d met when she was seeking funding for the CTC. At that time he’d offered to help “in any way.” She took him at his word.

“By that time, I had made the connection that Michael was the person I’d seen laying in front of Louie’s for a long time,” Quartermaine recalls.

Seidensticker was granted two temporary guardianships as the program worked to obtain disability benefits and find housing for Michael. When the process stretched beyond the time for extensions, Seidensticker sought permanent guardianship. Though he laughs about adding a 61-year-old African-American to his family of three adult children and one adolescent, he never hesitated.

“I didn’t think twice about anything,” he says. “It had to be done. It would have been leaving it incomplete if I didn’t.”

Seidensticker doesn’t readily talk about his own past. What he does say is that in his late 20s, when he was “uneducated, basically homeless” and wrestling with addictions, “someone put out their hand to me.”

“It saved my life,” he says. “So I always felt an obligation to give back.”

His subsequent success, beyond his wildest imaginings, has led him to provide employment and support to countless others down on their luck, through his restaurants and a nonprofit he formed called Tableseide Cares.

On a sunny day shortly before Christmas, Seidensticker drives to the apartment where Michael lives alone, assisted by twice-a-day visits from caretakers Megan Howell and Barbara Raskowski of A Second Heart Senior Advocacy, a fledgling nonprofit that assists those 55 and older who are homeless or at risk.

The apartment is tiny, one room and a bath, but tidy and organized. There is a television atop the refrigerator and the pet Michael begged for — a black guppy named “Fish Filet” — is swimming happily in a tiny plastic tank above the microwave where he cooks instant grits for breakfast. Toothless but groomed, dressed in carpenter jeans, untied athletic shoes and an unbuttoned but pressed shirt, Michael sits on his neatly made bed, eyes on the television as he affably answers questions.

“It’s nice, it’s great. It feels really great,” he says of his new home. “Sleeping in a bed, it’s good, it’s comfortable. I can take a shower and everything. All that’s real good.”

Howell and Raskowski say Michael was anxious and combative when they first met. They feared he would run away. But over the past six months — during which they helped him evacuate to a shelter during Hurricane Irma — that gradually changed.

“At first, it was very intense,” says Raskowski. “He had so many things against him. You could tell his inner core was so hurt. He didn’t know how to live. Now, he enjoys his privacy. When you show people love, you’d be amazed what it does.”

Recently, Quartermaine traced Michael’s arrest history to 1983 and found that, even then, there was documentation of his incompetency. Meaning that, for nearly 35 years, “society threw him away.”

“So is this a success? I don’t know,” she says. “It’s great where he’s at now, but it’s not really a success to me that he had a life like he had and it took this long for people to get their heads together and do something.

“When you think about the number of cases he had and the number of people who came in contact with him, it’s shocking to me that, given all the gifts we have in Sarasota, it went on for this long. We can’t let that happen again.”