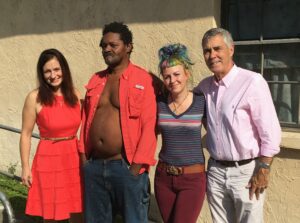 An update on downtown Sarasota’s Michael Smith, plus a new program for those with mental health challenges.

Mental illness — and I include in that category addiction — remains a low priority in this country, at least judging by legislation and philanthropy. Our state government recently granted nearly 10 times the funding to expand school security personnel than it gave to increase school mental health services (not that the amounts were sufficient to cover either) and in the recent Giving Challenge, a single animal rescue organization earned more than all the mental health and addiction nonprofits combined. Now I’ll grant you a kitten is more endearing than someone who is psychotic or in withdrawal, but should that be our standard?

If, like me, mental illness or addiction has touched your family in a life-altering way, then you are aware — and not just on any particular day, week or month, but all the time. You are aware because you know neither a single course of meds nor a one-time injection of dollars is going to turn the ship around. You are aware because you know from firsthand experience that these are chronic illnesses requiring life-long monitoring, and that relapse is the biggest hurdle.

Which is why, a few weeks ago while on the regular route traversed by my Saturday morning walking group, I let out a wail like I’d been mortally wounded when I saw a certain familiar figure lounging on a sidewalk bench on lower Main Street.

“What’s wrong?!” the friend I was walking with cried in alarm. “Are you hurt?”

The man on the bench was Michael Smith, whom I once referred to as “the face of Sarasota’s homeless population.” I wrote about Michael last year when, after more than 30 years of living on the streets downtown, he transitioned to an apartment, thanks to a new jail diversion program and the efforts of a handful of extraordinary people in the legal and social service systems. After visiting him at his first home in decades, I shared how he’d adjusted to wearing a shirt and shoes, having a bed and a daily shower and even how he’d acquired a goldfish as a pet.

That was the most-read column I’ve written since taking over this position last November. It seemed that everyone knew Michael, had offered him food or money, or had engaged in regular, if disjointed conversations. Many had been aware of his absence from the street, and expressed relief to know he was OK.

So needless to say, when I saw Michael back in his familiar setting, his shirt unbuttoned, his shoes untied, a blanket nearby, I was sure he’d had a relapse. I walked over and called his name.

I anticipated he wouldn’t recognize me and might even resent my inquiry. Instead he shook my hand and nodded, remembering who I was and recalling our interview. It turned out he’d been moved to a new apartment closer to downtown, and that, as he put it “I just wanted to take a walk.” He assured me he still liked his apartment and its comforts, though he related, sadly, that his goldfish had died.

I later found out it was a bit more than that; he’d fallen off the wagon and spent at least part of a night sleeping in his old spot behind Louies Modern. Like a foster child who wants nothing more than to go back to a dysfunctional home no matter how pleasant the placement, Michael was in search of his comfort zone — the habitual bench, the customary blanket, the regular hellos and handouts from those who’d become “friends” over time. Clean sheets, regular food and a daily shower weren’t enough. He needed a connection. He needed company.

Fortunately, his caretakers, who understand the normality of such a falter, quickly got him back on track and found some avenues for more social engagement.

Coincidentally, this past week marked the first of a new program of monthly social evenings for people with mental health challenges, a joint effort of the local National Alliance on Mental Illness (NAMI) chapter and Vincent Academy, Sarasota’s “recovery through work” vocational training facility. The idea came out of the art workshops held during my FACEing Mental Illness project and my growing conviction that social isolation can be one of the biggest barriers to a sustained recovery.

For this first gathering, I taught a salsa partner dance class. Believe me, for people isolated and estranged by their illness, this activity was way outside anyone’s comfort zone. Which is why it was so surprising and affirming to see the participants’ enthusiastic response. For many, it was the most physical contact they had in years.

Frequently, the first thing to disappear at the onset of mental illness or addiction is friends; family members hang in longer, but even their patience, funds or tolerance sometimes run out. Addicts and the mentally ill tend to be loners, often by their own choice. Yet human beings are meant to be in relationship; solitary confinement is one of the most destructive tortures to a healthy mind.

So Mental Health Awareness month isn’t just about thinking abstractly of “those poor people.” It is about extending understanding and support — whether that’s a check or a smile — and yes, even friendship to someone who feels rejected, judged, scorned, ostracized, feared and unworthy. It’s not just about being humane; it’s about being human.